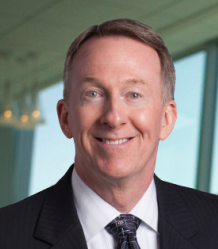 Kenton Thompson joined Charles Schwab in the fall of 2012. During his first four years at Schwab, Thompson served as senior vice president of bank products and distribution. In this role he oversaw all functions related to bank lending product development, sales, community development and diverse markets strategy.

In 2017, Thompson expanded his leadership responsibilities and was named the president of Charles Schwab Signature Bank. He and his teams are committed to doing business by the guiding principle: always look through the client’s eyes.

Prior to joining Schwab, Thompson spent almost 20 years at the regional bank KeyCorp. At Key, he started as a commercial banking relationship manager dealing with privately owned businesses and their owners. Moving into a leadership role, he later became the national line-of-business executive leader for the commercial banking group. In his last five years at Key, he served as president of the wealth management business where he was responsible for the combined private banking, personal asset management, personal trust, insurance and retail brokerage integrated delivery teams for high net worth clients.

Thompson graduated from Youngstown State University, in addition to the University of Wisconsin’s Graduate School of Banking.

Back
This item appears in:
This profile has been archived and may contain content that is out of date.